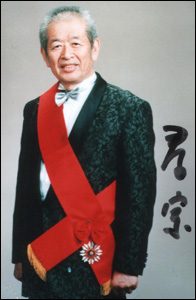 Dr. Hatsumi founded the Bujinkan, which means “Divine Warrior Hall,” in honor of his teacher, Toshitugu Takamatsu. The nine warrior schools of the Bujinkan hail from the ancient battlefields of Japan; six are old samurai schools, the remaining three are schools of the oft-misunderstood ninja. These historical roots provide a mine of rich teachings that are equally applicable to modern situations, teaches Dr. Hatsumi.
Dr. Hatsumi preaches the importance of understanding the principles underlying techniques, not just the mechanics–things that will serve the greatest benefit in the flurry of a real battle. This practicality is the Bujinkan’s biggest draw for 200.000 of practitioners around the world, many of whom are involved with law enforcement or personal security.
Dr. Hatsumi, a former bone-setter, has penned over a dozen books, has published over 60 DVD’s, and is the former chairman of the Writers Guild of Japan. For his efforts to spread the art of the Bujinkan throughout the world, Dr. Hatsumi has been recognized by many governments, private organizations and distinguished individuals.
Among Dr. Hatsumi’s other many honors, awards and recognitions are (see full list later in this text):

Dr. Hatsumi holds black belts in several arts, including judo, karate, kendo, aikido and jojutsu, and has studied such western arts as boxing. He is grandmaster of the following nine ancient schools of Japanese martial arts which now is the foundation of the Bujinkan:

Some of Dr. Hatsumis Prizes, Awards and Recognitions

Masaaki Hatsumi has become the first budoka (martial artist) in the world history to be awarded an Apostolic Blessing by the Vatican. The certificate, which arrived in Japan in May 2001, bears a painting of Pope John Paul and states the following: 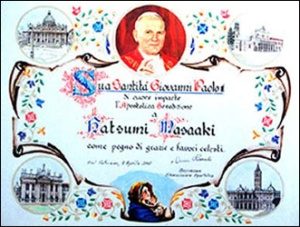 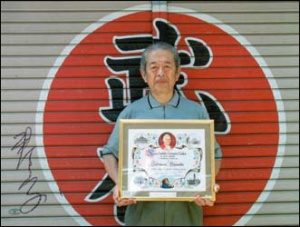 Masaaki Hatsumi, founder and grandmaster of the Bujinkan Dojo, has been awarded the International Culture Award by the Japanese government. The award, the highest honor given for cultural exchange, was presented to Dr. Hatsumi by a member of the Imperial Household on November 22, 1999.

“This award is a great honor for the Bujinkan,” stated Dr. Hatsumi at the presentation ceremony. Dr. Hatsumi is the 92nd recipient of this prestigious honor to date. Dr. Hatsumi was nominated for his cross-cultural leadership in martial arts instruction.

Blackbelt magazine´s 1986 Instructor of the Year, Dr. Hatsumi is best known for “opening the doors” to Ninjutsu to non-Japanese. As grandmaster of the Bujinkan dojo, Dr. Hatsumi actively travels the world to share the teachings of Budo Taijutsu as passed to him by his teacher, Toshitsugu Takamatsu. Each year, Dr. Hatsumi holds two international Taikai (gatherings) for training, usually alternating between Europe and the United States. Additionally, hundreds of eager students from scores of countries also converge on Japan for training with Dr. Hatsumi each year. 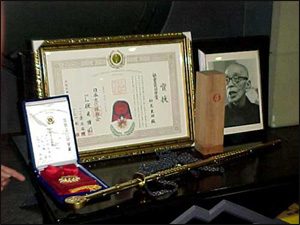 CERTIFICATE OF APPRECIATION FROM THE FBI 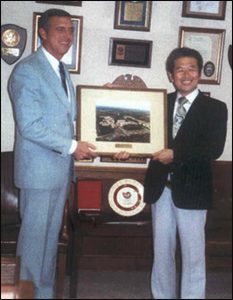 Dr. Hatsumi receiving a certificate of appreciation from the FBI´s training director on one of his trips, for training members of the FBI. As he said: “Fighting techniques that lack mental flexibility is of no use to us in the FBI”

The knight and member of the San Giorgio Order, Mr. Francesco Stagno d´Alcontres, is a member of the Bujinkan and bestowed with great affection and admiration as a knight of tolerance and justice. 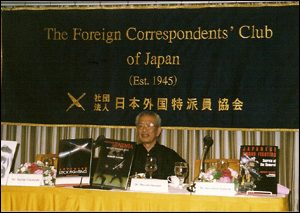 Dr. Hatsumi has written numerous books and articles on philosophy and martial arts that have been translated into many languages. He writes a weekly column for a local Chiba prefecture newspaper and is a recurring subject of the major Japanese martial arts magazine, Hiden. For his efforts to spread the art of the Bujinkan throughout the world, Dr. Hatsumi has been recognized by many governments, private organizations and distinguished individuals. During the above ceremony, he was recognized as honorary member of the “FOREIGN CORRESPONDENT´S CLUB OF JAPAN”, for all his books produced during these past years in Japan and abroad. At this time, the Grandmaster presented his latest three books of the Kodansha printing house.
For more information: http://www.fccj.or.jp/aboutus 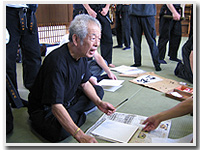 Dr. Hatsumi is a recognized artist with pen and the traditional brush. Observing his movements when painting is like watching his flow over the tatami mats in the dojo when practicing combat drills with students from around the world. So effortless and with such a precession, distance and timing. At the trainings at Bujinkan Hombu Dojo (Head training hall in Japan). Dr. Hatsumi often use the brake, from the combat training, to paint for his students. 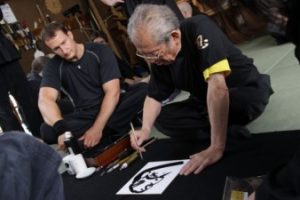 Dr. Masaaki Hatsumi is a recognized painter, whose paintings have been shown at important exibitions around the world, following is a small sample of some of his work.

Below is one of Dr. Masaaki Hatsumi´s paintings as a gift to her Highness Infanta Dona Pilar de Borbon y borbon (sister to phis Majesty King of Spain). 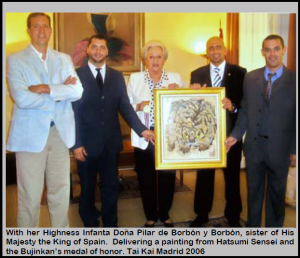